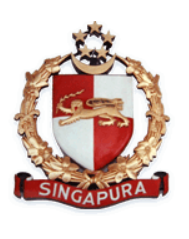 Designed in 1960, the Presidential Crest features a red and white shield emblazoned with a lion carrying a stalk of laurel. This shield is crowned by a crescent moon and five stars, and encircled by an orchid wreath. Beneath the wreath flies a red banner with the word "Singapura".

The shield is symbolic of the President's role as the Defender of the Constitution of the Republic of Singapore. The lion carrying the laurel symbolises victory and glory to Singapore, the Lion City.

The other details on the Presidential Crest share similar elements with the national flag. The red and white colours represent universal brotherhood and equality, and everlasting purity and virtue respectively. The crescent moon represents a young country on the ascent. The five stars symbolise democracy, peace, progress, justice and equality.