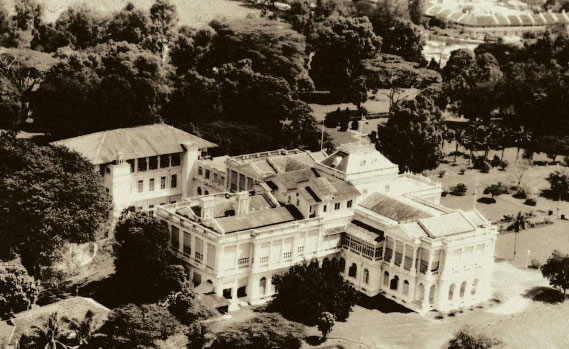 The Istana is the official residence of the President of the Republic of Singapore. It occupies over 40 hectares in Orchard Road and is an important part of Singapore's history and heritage.

The Istana building was built by the British Colonial government to house its governors. Completed in 1869, it was designed and built by Colonial Engineer, Major John Frederick Adolphus McNair, and was known then as the Government House. When Singapore attained self-government in 1959, it was handed over to the Singapore Government and renamed Istana (“Palace” in Malay).

A budget of $100,000 was originally approved by the Legislative Council for the building of a Government House of a smaller scale in July 1867. A plan for a larger building was subsequently approved but there were insufficient funds to complete the project. Fortunately, the Duke of Edinburgh – the second son of Queen Victoria – was to make a visit to Singapore, and Major McNair seized the opportunity to increase his budget.  The Government House was eventually completed at a cost of $185,000.

The Istana underwent extensive renovation in the 1990s, to add more space and modern conveniences. The building today has six function rooms used for ceremonies and to receive foreign dignitaries and guests.