To aid the President in carrying out her roles, staff in the President’s Office work tirelessly behind the scenes.

In this section, we introduce some of these unsung heroes within the President’s Office. Aide-de-Camp to the President Aide-de-Camp to the President

“As full-time and honorary ADCs, we ensure that ceremonies and events presided over by the President are conducted smoothly and with decorum, in accordance with protocol practices.”

Ever seen the men and women clad in uniform and standing behind the President at state ceremonies?

They are the Aide-de-Camp (ADC) to the President. The term “Aide-de-Camp” is of French origin and means “camp or field assistant”. The ADC was originally a military assistant in the field to a Sovereign, Chief of State, or General. They transmitted orders and supervised operations in the name of their commander, and even exercised delegated authority on occasions.

Today, the ADC is an officer of the uniformed services who assists the President. The ADC to the President attends to the needs of the President and accompanies the President at State functions, ceremonies or events of ceremonial nature. They are responsible for the coordination, planning, implementation and follow-up of the President’s events both locally and overseas. They also ensure that both local and internationally accepted protocol practices are observed at all times.

There are currently three full-time ADC serving the President, one of whom is a female. They are assisted by a corps of Honorary ADCs from the Singapore Armed Forces, the Singapore Police Force and the Singapore Civil Defence Force. “I am proud of my job and happy to be able to do what I do. It is great to have the opportunity to meet many overseas VIPs when they come to visit Singapore.”

Mr Ismail Bin Abdul Ghani was born and bred on the Istana grounds, and has been working at the President’s Office as a butler since he was young!

A third generation butler, Ismail’s grandfather and father were also butlers to the colonial governors and previous Presidents. As the staff quarters were housed in the Istana grounds back in the old days, Ismail was literally born in the Istana in the late 1940s, which started a lifelong association with the President’s Office.

When he was growing up on the Istana grounds, Ismail often saw the butlers serving dignitaries and important guests. This had aspired him to be one when he grew up.

Over the years, Ismail maintained a humble personality and joyous spirit, so much so dignitaries such as Queen Elizabeth were impressed with Ismail’s hospitality and had many good things to say about him. 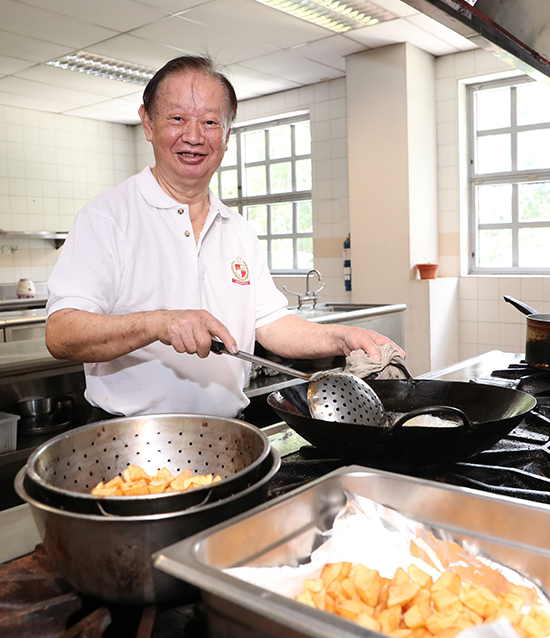 “Wherever we work, the important thing is that we like the job. We must have a sense of pride in what we do.”

Affectionately known as “Uncle Hoon” to everyone in Istana, he had been a chef at the Istana for 57 years. Over the years, Uncle Hoon had prepared a variety of meals for countless guests and foreign dignitaries. For five decades, Uncle Hoon’s comfort food had soothed the challenges of nation-building, and his delectable meals had added to the warm hospitality received by visiting dignitaries.

Although Uncle Hoon had retired from the service in January 2020, he is still dearly missed by Istana staff. “It is amazing that some of the trees here are more than 150 years old and thriving well. I am honoured to be given the opportunity to serve in such a wonderful and enriching place.”

The Istana is a treasure trove of flora and fauna. Did you know it is home to more than 200 species of plants?

The flora and fauna is carefully taken care of by the NParks team led by Senior Curator, Mr Wong Tuan Wah.

Tuan Wah has been a curator on the Istana grounds since 1996.  He had the privilege of working under the late Mr Lee Kuan Yew, who was often fondly remembered as the Chief Gardener of Singapore. Tuan Wah remembers the late Mr Lee as being interested in the landscaping of the grounds, and will ask Tuan Wah various questions, some of which were so pertinent that they would trouble the minds of even horticultural experts.

Today, Tuan Wah not only manages the way the grass is cut or the type of flowers to grow, but also leads a team of dedicated gardeners. With the support of President Halimah, Tuan Wah has also recently brought volunteer gardening into the Istana.

A person passionate about nature photography, scuba diving and walking, Tuan Wah’s latest interest is aerial photography using drones. Putting his photography skills and active lifestyle to good use, you can often spot him walking along the Istana grounds capturing the best shots when flowers bloom in season. His favourite part of the grounds is the Istana Lawn, as the Main Building in the background provides guests with the perfect angle for photographs. “Istana is like a big family which requires a great team effort from all members to uphold and maintain its dignity.”

Meet Mrs Tracy Tee Teow Lee of the Programmes and Partnerships team. The team is responsible for the President’s outreach to the community. A large part of the work involves working with schools and other partners to design programmes such as competitions for students, so that they develop greater appreciation for the rich history and heritage of the Istana.

Having worked in the President’s Office for over 40 years, Tracy has served almost all Singapore’s Presidents. With that rich experience, Tracy is almost like a walking encyclopaedia today, having organised numerous events, managed the Istana Heritage Gallery and even been a personal assistant to the spouses of some former Presidents.

Tracy enjoys meeting people through her job as she is able to learn new perspective and share Istana’s long history with them. She derives job satisfaction from seeing the happy faces of visitors or participants when they enjoy the events that she had organised.